If you know me at all, you know I am a musical theatre nut. Love them. Even the bad ones I love, albeit a little bit less than others.

I didnt first experience my first taste of theatre until I was 12 years old, but from that first moment, I was hooked. From the first musical I saw, (Meet Me in St.Louis) to the first musical I was in  (42nd Street), to my first real leading role (South Pacific), I only grew deeper and deeper in love. I immediately "got" the magic of live theatre. It enraptured me and I deeply FELT for the leading ladies and forlorn men. Unlike most theatre-lovers, I dont love being IN them any more than I love going TO them. Being in the audience is just as gratifying for me!

My taste is bizarre - I love the classic shows, like West Side Story and Evita, but I also appreciate the modern (Rent / Spring Awakening) and the fluffy shows (Legally Blonde, Jersey Boys). Basically, as long as I can sing it, I like it. (Sorry, Oklahoma. I havent found a redeeming quality in you yet).

So, it should come as no shock that when I found out I was having a boy, I was slightly unsure of how to reconcile my love for theatre with a boy's "typical" hobbies. I wondered if a boy who loved sports and wrestling could also appreciate costumes, stage makeup and jazz hands.

I needn't have worried.

From the time he could barely speak, he fell in LOVE with The Wiggles. Telling a story through singing and dancing just CAPTURED him, and I knew he had what I had - the theatre bug.

His first musical was "The Wiz" at the Toledo Rep when he was barely 3 yrs old and he was in a TRANCE during the whole thing. His eyes never left the stage and during intermission, he even got annoyed at how long it was taking people to pee and grab a drink. Back to the SHOW, people!

Since that time, he has seen Seussical (he liked!), Mary Poppins ("This one is for girls, Mommy.") and most recently, "In the Heights." My husband and I saw In the Heights in NYC and brought home the soundtrack. Within 2 weeks, he knew every word of every song (and some are in Spanish!) and was BEGGING us to take him to see it. When we found out it was coming to Detroit, we knew we HAD to let him see it, despite it costing us nearly a month's salary to do so.

Last weekend, we saw the show and it was every bit as fabulous as the first time we had seen it. Quinn loved it so much, he barely spoke. When his favorite song came on, he looked at me and actually said, "Isnt this the BEST?!" and I wanted to cry. Yes, dear son, it is the best.

I hope he always carries this appreciation for the arts. He is stereotypically a boy in every way (pees everywhere but the toilet, wrestles anyone who is willing and yelling obnoxious sports terms at the television every NFL game), but he also carries a soft spot for the beauty of a story, told through gorgeous melodies. I hope this is making him into a well-rounded man someday, but at the very least, it's making his mom love him more. :) 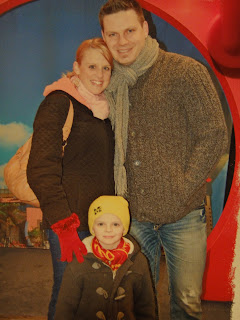 Heading in to theatre! 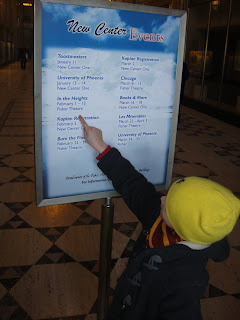 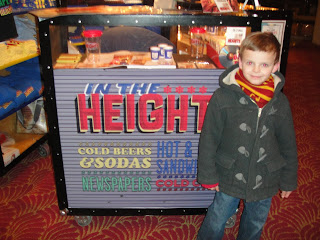 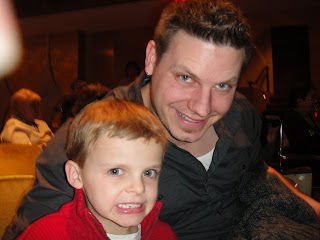 Daddy and Quinn wait for the show to start! 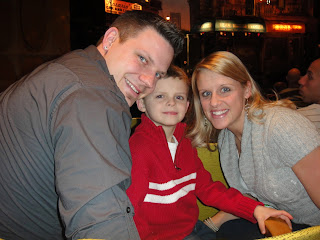